Last week’s post talked about how people often say “sorry” when it isn’t necessary.  It’s playoff season in the NFL and that time of year where a single mistake makes the difference between the end of your season and staying in the hunt for the Super Bowl.  Yesterdays wildcard game between the Seattle Seahawks and the Minnesota Vikings was notable for it’s extreme cold, it was -6 Fahrenheit at kickoff, and for an incredible missed field goal in the dying seconds of the game.

The Seahawks have gone from 9-0 behind to 10-9 ahead.  But with less than a minute left in the game Minnesota make their way up the field and get into position for a relatively simple field goal from 27 yards that would probably win them the game. Up steps Blair Walsh the Minnesota placekicker.  Put him on the training field at 27 yards out and he’ll make the kick 100 times out of 100.  In game situations this year, he’s made 34 of his 38 field goal attempts.  This man’s entire professional career has been based around his ability to kick a football through the uprights from 20, 30, 40 or even 50 yards. 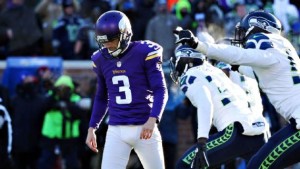 He steps up, kicks the ball and it sails left of the uprights.  In all honesty, it’s not even close.  Blair can put that one down as “a really bad day at the office”.  When you or I make a mistake we get to go home at the end of the day, put it behind us and move on.  As an NFL player you are obligated to make yourself available to the sporting press for interviews.  Your wounds are still raw and what the press want is an answer.  “How did you miss a kick from 27 yards?”.

When something goes wrong, our immediate human response is to want to know why.  I think this comes from evolutionary wiring that tries to prevent us from making the same mistake twice.  “We all make mistakes” is a pretty common phrase.  But somehow when WE make a mistake, our instincts aren’t quite so kind.  Sometimes we take that mistake and use it as something to beat ourselves with : “I always miss kicks under high pressure situations” OR “If I’d worked harder, I would have made that kick”.  Then there’s the other extreme, the mistake feels so painful that we try to push it somewhere else.  “It was too cold to play” or “The holder got the ball the wrong way round”.  There’s a variation of this where we redefine so that we can’t be blamed, see new Volkswagen CEO Matthias Mueller responding to a question about their recent emissions scandal :

“We didn’t lie. We didn’t understand the question first. And then we worked since 2014 to solve the problem”

Somewhere in between turning the mistake on yourself, and turning on others is a middle point where you’re able to acknowledge and recognize your mistake.  Take accountability for your part of it. And move on.  In his post-game interview last night, when I all he wanted to do was to talk about something else, Blair Walsh found the middle ground.  He acknowledged his kick didn’t meet the standards he sets for himself, or that you would expect for an NFL kicker.  He apologizes to his team mates for letting them down at a crucial time. And acknowledges that he’ll be working hard to move past this in his career.